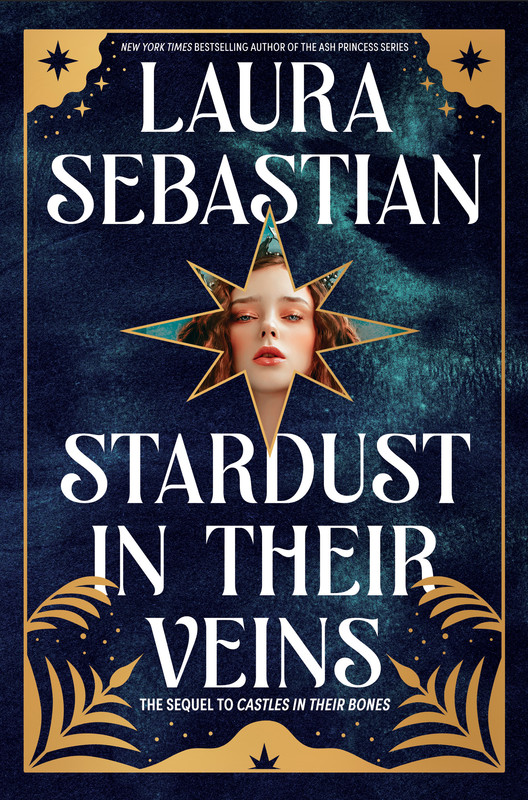 Stardust in Their Veins by Laura Sebastian

Immerse yourself in the second book in a fantasy trilogy from the New York Times bestselling author of the Ash Pricess series. The sequel to Castles in Their Bones is the story of three princesses and the destiny they were born for: seduction, conquest, and the crown.

Princesses Beatriz and Daphne have lost their older sister, but their mother’s grand scheme of taking the continent of Vesteria is far from complete. With the country of Temarin now under the Empress’s control, only the nations of Cellaria and Friv remain free from her rule. What’s worse, an ominous prophecy has begun to shine through the constellations: the blood of stars and majesty spilled.

Usurped by conniving cousins Nico and Gigi, Beatriz fears for her life, while in icy Friv, Daphne continues her shaky alliance with the rebels even as she struggles to stay a step ahead of them. But when an unlikely ally offers Beatriz a deal, she finds herself back in her mother’s sights.

With enemies around every corner and the stars whispering of betrayal, Daphne and Beatriz can’t trust anyone–least of all each other. If they’ve learned anything, though, it’s that the Empress’s game is constantly changing. And the arrival of surprise visitors from Temarin just might tip the scales in the princesses’ favor . . . if they manage to avoid meeting their sister’s fate before they can make their next move.

This is a sequel and there will be spoilers for book one below.

I love Laura Sebastian’s books. I think I’m liking this series even more than the Ash Princess one. The books are long and I still tend to fly through them.

I don’t want to give away too much of the plot for this one. Beatriz and Daphne are both morning the loss of Sophronia. Daphne is still loyal to her mother though and doesn’t believe that she would have anything to do with the death of her own child. Beatriz has no problem believing it. She was always the one who gave her mother problems growing up. She knows her mother is ruthless and that she needs to figure out her plans. No matter what she does, her mother always seems to be a step or two ahead of her. Violie and Leopold survived. They come across Ambrose and he joins them. The three of them end up at an inn with Beatriz and Pasquale. They got out with the help of their mother’s empyrea Nigellus. Beatriz doesn’t trust Nigellus, but she needs to learn about her magic. They decide to split up. Nigellus takes Beatriz and Pasquale home to her mother. The other three go to Friv to try to get through to Daphne. Leopold is thought to be dead and they want to keep it that way for now. A lot happens from here that I don’t want to give away. I will just say that there are always twists and a somewhat surprising ending. I really need the third book now.

I gave this book 5 stars and it will make my top ten for the year.

Have you read this?  Have you started the series?  Is it on your TBR?