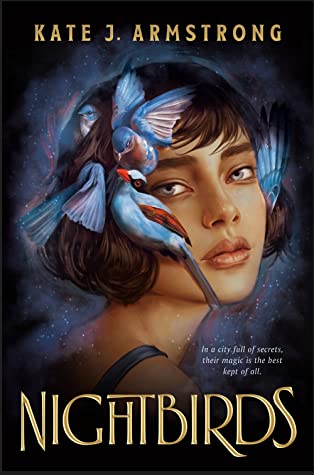 In a dazzling new fantasy world full of whispered secrets and political intrigue, the magic of women is outlawed but four girls with unusual powers have the ability to change it all.

As this Season’s Nightbirds, Matilde, Aesa, and Sayer spend their nights bestowing their unique brands of magic to well-paying clients. Once their Season is through, they’re each meant to marry a Great House lord and become mothers to the next generation of Nightbirds before their powers fade away. But Matilde, Aesa, and Sayer have other plans. They know their lives as Nightbirds aren’t just temporary, but a complete lie and yearn for something more.

When they discover that there are other girls like them and that their magic is more than they were ever told, they see the carefully crafted Nightbird system for what it is: a way to keep them in their place, first as daughters and then as wives. Now they must make a choice—to stay in their gilded cage or to remake the city that put them there in the first place.

Is this book on your TBR yet?