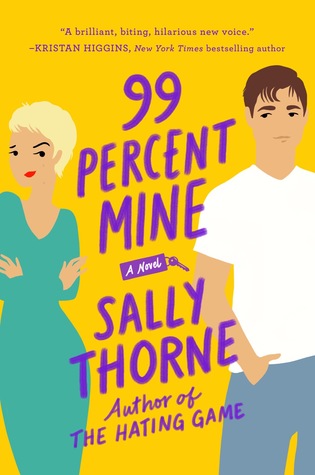 99 Percent Mine by Sally Thorne

Crush: a strong and often short-lived infatuation, particularly for someone beyond your reach…

Darcy Barrett has undertaken a global survey of men. She’s travelled the world, and can categorically say that no one measures up to Tom Valeska, whose only flaw is that Darcy’s twin brother Jamie saw him first and claimed him forever as his best friend. Despite Darcy’s best efforts, Tom’s off limits and loyal to her brother, 99%. That’s the problem with finding her dream man at age eight and peaking in her photography career at age twenty—ever since, she’s had to learn to settle for good enough.

When Darcy and Jamie inherit a tumble-down cottage from their grandmother, they’re left with strict instructions to bring it back to its former glory and sell the property. Darcy plans to be in an aisle seat halfway across the ocean as soon as the renovations start, but before she can cut and run, she finds a familiar face on her porch: house-flipper extraordinaire Tom’s arrived, he’s bearing power tools, and he’s single for the first time in almost a decade.

Suddenly Darcy’s considering sticking around to make sure her twin doesn’t ruin the cottage’s inherent magic with his penchant for grey and chrome. She’s definitely not staying because of her new business partner’s tight t-shirts, or that perfect face that’s inspiring her to pick up her camera again. Soon sparks are flying—and it’s not the faulty wiring. It turns out one percent of Tom’s heart might not be enough for Darcy anymore. This time around, she’s switching things up. She’s going to make Tom Valeska 99 percent hers.

I really enjoyed the relationships in 99 Percent Mine. Darcy was tough, but also loving and kind. Tom was a bit annoying with how perfect he was, but I did like him and wanted him to be with Darcy. Jamie annoyed me so much. There were very few times that I thought he was ok. But I did appreciate that he really did love his sister. And I really loved Truly. I would actually like a book with her as the main character. She was sweet and dedicated. It was definitely the relationships with these characters that stood out to me, more than the story itself. I did love the story of the grandma though. She seemed great and fun. It was obvious how much she meant to Darcy. The book pacing was good. It was sexy, but not overly so. The scenes weren’t super steamy to me, but they were still good.