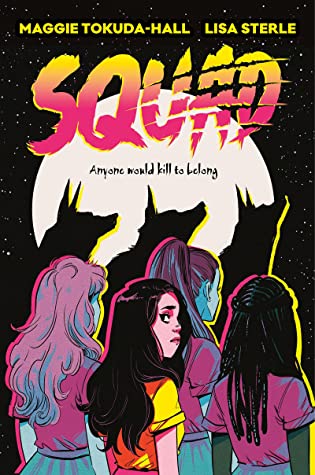 Pretty Little Liars meets Teen Wolf in this fast-paced, sharply funny, and patriarchy-smashing graphic novel from author Maggie Tokuda-Hall and artist Lisa Sterle. When the new girl is invited to join her high school’s most popular clique, she can’t believe her luck—and she can’t believe their secret, either: they’re werewolves. Fans of Mariko Tamaki and Elana K. Arnold will devour the snappy dialogue, vivid artwork, and timely social commentary.

When Becca transfers to a high school in an elite San Francisco suburb, she’s worried she’s not going to fit in. To her surprise, she’s immediately adopted by the most popular girls in school. At first glance, Marley, Arianna, and Mandy are perfect. But at a party under a full moon, Becca learns that they also have a big secret.

Becca’s new friends are werewolves. Their prey? Slimy boys who take advantage of unsuspecting girls. Eager to be accepted, Becca allows her friends to turn her into a werewolf, and finally, for the first time in her life, she feels like she truly belongs.

But things get complicated when Arianna’s predatory boyfriend is killed, and the cops begin searching for a serial killer. As their pack begins to buckle under the pressure—and their moral high ground gets muddier and muddier—Becca realizes that she might have feelings for one of her new best friends.

Lisa Sterle’s stylish illustrations paired with Maggie Tokuda-Hall’s sharp writing make Squad a fun, haunting, and fast-paced thriller that will resonate with fans of Riverdale, and with readers of This Savage Song, Lumberjanes, and Paper Girls.

Just a quick review of this one.

I really enjoyed Squad. Both the writing and the artwork. Becca just wants to be popular and belong. When one of the most popular girls, Marley, meets her in the bathroom at school, she invites Becca to lunch with them. Her other friends are Arianna and Amanda. They take Becca into their group and start going to parties together. What Becca doesn’t know is that they are werewolves and want her to join. They only have to eat once a month and they only eat crappy boys that try to take advantage of them at parties. At first, Becca is happy to belong. But things get harder and when the police get involved, they have to find another way. But their squad isn’t as perfect as Becca thought and there is a lot of fighting within the group.

Have you read Squad?  Is it on your TBR?