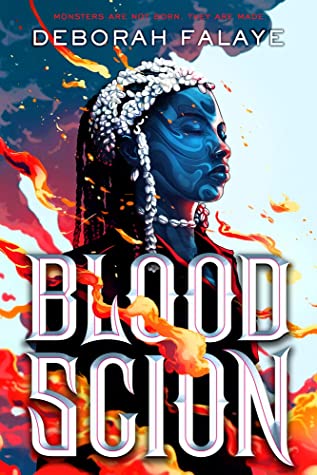 This is what they deserve. They wanted me to be a monster.
I will be the worst monster they ever created.

Fifteen-year-old Sloane can incinerate an enemy at will—she is a Scion, a descendant of the ancient Orisha gods.

Under the Lucis’ brutal rule, her identity means her death if her powers are discovered. But when she is forcibly conscripted into the Lucis army on her fifteenth birthday, Sloane sees a new opportunity: to overcome the bloody challenges of Lucis training, and destroy them from within.

Sloane rises through the ranks and gains strength but, in doing so, risks something greater: losing herself entirely, and becoming the very monster that she ahbors.

Blood Scion is hard to read, but it’s so good. I had to take breaks often and read it slower than normal. That helped me a lot. This book is dark and brutal.

Sloane has been searching for answers as to what happened to her mom two years earlier. She and a man disappeared and the local villagers believe they ran away together. But Sloane is positive that her mom wouldn’t have left her. Nightwalkers search the village every night after midnight and kill anyone out. Sloan is a Scion, descendant of Shango, the god of heat and fire. She has little control over her fire at times and has killed people with it. Being a Scion is a death sentence. The Lucis conquered their home centuries before and they control everything now. The Lucis started a Draft that puts fifteen year olds into service. If you try to run, you and your whole family are killed. And no one really comes back home after their three years as soldiers is up. Sloane just turned fifteen and was drafted. She doesn’t know how she will do it. She’ll be forced to kill innocent people just because of who they are. She will kill her own people. There is a test right away and Sloane has to murder someone just to get in. Sloane is abused and tortured. The army turns kids into monsters and Sloane is worried that she will be one of the worst. But she’s determined to survive and find the answers to her mom’s disappearance, no matter what.

This book is full of abuse. What they do to the recruits is horrible. The pacing was great. I cried more than once while reading. And there are some pretty major plot twists. I don’t even know how many times I gasped while reading, but it was quite often. If you can handle reading about racism and the abuses, I suggest giving this one a try. I cannot wait to read book two once it’s out.

I gave this book 5 stars and it’s one of the best books I’ve read this year. Thank you to the publisher for sending me a link to Netgalley.

Warnings for attempted rape, death, torture, physical abuse, whipping, racism, fire, blood, violence, and gore. I’m probably forgetting some major ones. The author does go into details for some of these things.

Have you read Blood Scion yet?  Is it on your TBR?

14 thoughts on “Review of Blood Scion by Deborah Falaye (ebook)”