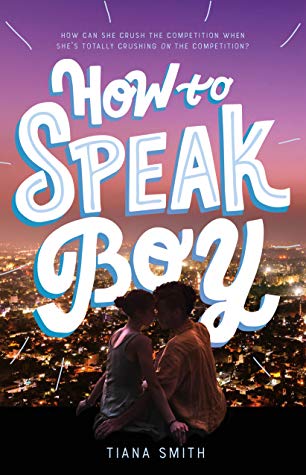 How To Speak Boy by Tiana Smith

Quinn and Grayson have been fierce speech and debate rivals for years. They can’t stand one another, either in competition or in real life.

But when their AP Government teacher returns their school assignments to the wrong cubbies, they begin exchanging anonymous notes without knowing who the other is.

Despite their differences, the two come together through their letters and find themselves unknowingly falling for the competition. Before the state tournament, the two of them need to figure out what they want out of life, or risk their own future happiness. After all, what’s the point of speech and debate if you can’t say what’s in your heart?

This was a super cute book that I think a lot of teens will relate to.  It’s so focused on the feelings of falling in love for the first time, along with all the insecurities and worries that go along with it.  I think it’s perfect for young teens, but older teens will relate, too.  First love is so different.  Even though it rarely lasts, it feels so special at the time.  And I can say with experience that once you find the right person, you’ll feel that way again.  But even stronger.

While the debate story was a lot of fun, I really focused in on the characters.  They drove the story and even though I knew who wrote the letters, I kept getting excited and impatient to find out what happened.

Quinn was pretty easy for me to relate to.  She was in her head.  A lot.  She put a lot of pressure on herself and thought so much about the future.  Falling for a boy (or maybe two) wasn’t one of her plans.  While this made her excited, she was also terrified by all the things that could go wrong.  She needed to focus and get into the college she wanted.  And to hopefully win state.

Quinn had two best friends.  Naomi was pretty much the perfect BFF.  They supported each other no matter what.  If there were boys, they didn’t get jealous and still talked.  Then there was Carter.  I wasn’t a big fan of his early on, but he had been almost an anchor for Quinn.  She was introverted and he helped her socialize more.  However, Carter had feelings for Quinn and she didn’t feel the same way.  Sadly, he didn’t take the hints and was pushy.  I was pretty spot on with my feelings about him.

Grayson was so easy to like.  At first, he came off as super arrogant, but you could tell he was really a nice guy.  He had a lot of patience with Quinn and didn’t push her.  Even though they were competing against each other, he always told her how great she did.  They loved to argue and compete over everything, but it didn’t feel bad.  I loved watching this friendship and relationship grow.

One more quick mention.  Quinn’s mom.  OMG, I loved her so much.  She was funny and supportive.  Being a single mom is tough, but she didn’t give up on her dreams and was good with whatever Quinn wanted for her future.  She was adorable with the scenes with Grayson.  I love good moms in books.

This was fun and it’s a really quick read.  I gave the book 4 stars.  Thank you to Swoon Reads/Macmillan for my review copy.

Have you read How To Speak Boy?  Are you a fan of enemies to lovers?