Welcome to my stop on the blog tour for Between Before & After by Maureen Doyle McQuerry.  This tour is being hosted by Fantastic Flying Book Club.  I’ll be sharing a Q&A with the author today and there will be a giveaway.

Between Before and After 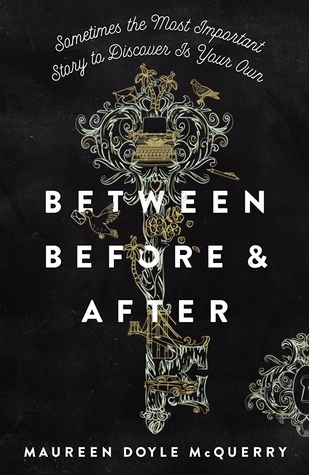 “The carnage began with the roses. She hacked at their ruffled blooms until they dropped into monstrous drifts of red on the parched yellow lawn … Only two things kept my mother grounded to us: my uncle Stephen and stories.”

Fourteen-year-old Molly worries about school, friends, and her parents’ failed marriage, but mostly about her mother’s growing depression. Molly knows her mother is nursing a carefully-kept secret. A writer with an obsession for other people’s life stories, Elaine Donnelly is the poster child of repressed emotions.

Molly spends her California summer alternately watching out for her little brother Angus and tip-toeing around her mother’s raw feelings. Molly needs her mother more than ever, but Elaine shuts herself off from real human connections and buries herself in the lives and deaths of the strangers she writes about. When Uncle Stephen is pressed into the limelight because of his miracle cure of a young man, Elaine can no longer hide behind other people’s stories. And as Molly digs into her mother’s past, she finds a secret hidden in her mother’s dresser that may be the key to unlocking a family mystery dating to 1918 New York—a secret that could destroy or save their future.

What influenced you to write this story?

The stories my father told about growing up on the streets of New York when he was 10. I wanted to discover how a young child could survive when there were few social services. I’ve always been curious about the lives of my Irish immigrant ancestors and this gave me a chance to do some research.

I’m also very interested in resiliency and what it takes to survive childhood  trauma with your humanity intact. There’s some interesting research in that field and this story was a chance to share some of the results indirectly. I was also reading C.S. Lewis’s Miracles when I first developed the story idea and was grappling with the very questions Elaine is in the book.

How much research do you have to do for each book you write?

I do lots of research, so it’s a good thing that I really enjoy the process! I want to immerse my readers in the time period and that means getting historical details right as well as channeling the voice and culture of the time. For example, Molly may seem a little young compared to today’s 14 year old. Think about the 1950’s. There were clearly defined roles for males and females, there was no social media, research had to be done at the library, movies were special occasions on the big screen. Slang was different and so were relationships between parents and children.

I traveled to New York to make sure my vision of 1918 Brooklyn was correct. I found an elderly, longtime resident to tour me through the neighborhoods. I made sure to include current new events from 1918. I also researched the flu pandemic with the Center for Disease control and the National Institute of health.

Even books with a fantastical element like the Peculiars, are thoroughly grounded in the time period. I researched the inventions, news, fashions, of 1888 so that my version of the world was based in the real 1888. Lena travels alone by steam train to a northern outpost, quite a daring and an unusual trip for a young woman in that time period.

Did you find anything strange or interesting while researching for this book?

Here are a few tidbits! Wallabout Market, in what is now downtown Brooklyn, was the world’s second largest wholesale market, with horses, wagons, produce, meats and a fair share of graft and corruption. The number of orphans in NY in the early 1900’s was about 30,000! Pigeon post was used extensively during WWI to carry messages from behind enemy lines and in WWII 32 pigeons received medals of honor from the military. In the 1950’ most women still wore girdles. The term teenager was first used in the 50’s.

Between Before & After has a depression aspect to the story. Did you/do you use sensitivity readers when writing?

I believe Elaine was suffering from PTSD based on traumatic childhood events. There was no clear definition of that disorder in the ‘50’s but it does include anxiety and can include depression. I did have a reader who suffers from PTSD read and give me feedback on Elaine. I also used my own experience of growing up with a father who suffered from this form of mental illness.

Did you have a specific reason for choosing 1918 New York?

Yes, my grandmother died in the flu pandemic in Brooklyn and that changed the trajectory of our family as my father and his two sisters became “flu orphans.” The story takes place in an Irish immigrant neighborhood very much like the one my relatives settled in years ago.

What are you working on now?

I’m polishing up a story that’s a modern retelling of the selkie myth. It’s mystery and magical realism set in Seattle. I’ve also just finished a manuscript set in the Inyo mountains of CA that involves a personal quest for two teens grappling with life after tragedy, an encounter with the three fates and a brush with the mythic lone pine devil.

Can you recommend some of your favorite historical mysteries? YA or other?

I love historical mysteries! Some that come to mind are the Ruby in the Smoke series by Phillip Pullman, Sherlock Holmes, The Historian, The Maisy Dobbs series and more recently, The Essex Serpent.

Prize: 5 Finished Copies of Between Before & After by Maureen Doyle McQuerry + Signed Bookplates (USA only)

Thank you all for stopping by and thank you to Maureen for answering all my questions!