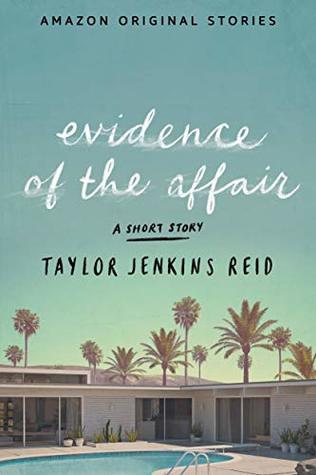 Evidence of the Affair by Taylor Jenkins Reid

The repercussions of an illicit affair unfold in this short story by bestselling author Taylor Jenkins Reid.

A desperate young woman in Southern California sits down to write a letter to a man she’s never met—a choice that will forever change both their lives.

My heart goes out to you, David. Even though I do not know you…

The correspondence between Carrie Allsop and David Mayer reveals, piece by piece, the painful details of a devastating affair between their spouses. With each commiserating scratch of the pen, they confess their fears and bare their souls. They share the bewilderment over how things went so wrong and come to wonder where to go from here.

Told entirely through the letters of two comforting strangers and those of two illicit lovers, Evidence of the Affair explores the complex nature of the heart. And ultimately, for one woman, how liberating it can be when it’s broken.

I was so excited to see this short story available on Amazon.  I bought it in September and I have no idea why it took me so long to read.  Melanie (meltotheany) recently reviewed it and that made me push it up on my TBR.  It’s a short story that only took about 40 minutes to read.

Not only was I sure I would enjoy this because of loving The Seven Husbands of Evelyn Hugo, but it took place in Southern California (mostly San Diego county).  I will read just about anything that takes place there and love it just for that reason.

Evidence of the Affair is told in letters only.  Carrie lives by LA and finds letters to her husband from another woman.  This takes place in the 70’s, so she doesn’t have the options to snoop online like we do now.  She looks up the woman and writes a letter to her husband.  David lives in Carlsbad with his wife and sons.  At first he doesn’t believe it’s his wife, but then he finds evidence, too.

Carrie and David continue to write to each other about their marriages and feelings.  Each of them wants things to work out with their spouses, but the affair continues.  Carrie and David’s friendship grows and they start meeting for lunch.  While writing, they both realize things that went wrong in their marriages and they are both willing to fix things to keep the lives they have.  Carrie has been suffering from infertility, too.  They discuss everything and keep sending the letters they find from their spouses.  Things change a lot by the end, but I won’t give away what happens.

I really enjoyed this friendship and the letters Carrie and David sent.  I loved how they shared and made each other better people throughout the friendship.  It was a quick read and I found myself wanting more, but I did like how it ended.

Warnings for adultery and infertility.

Evidence of the Affair is only $1.99 on Amazon.  (This is an affiliate link, so I do get a very small amount if you buy it through the link.)

Have you read this one yet?  Without spoiling, what did you think?