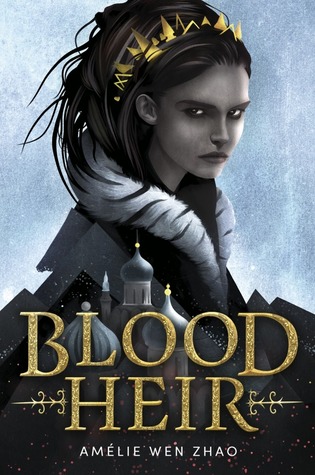 A fugitive princess with the power to control blood. A black-hearted conman with no past and no future. An Empire spiraling into darkness. A world worth saving.

The Cyrilian Empire: a glittering white sprawl of frozen tundras and ancient, snow-capped forests, where ice spirits roam beneath the flickering northern lights, and where slavers hunt Affinites — those born with powers to manipulate elements.

Born with an horrifying Affinity to blood, Anastacya Mikhailov has never believed herself to be anything more than a monster. Her curse rings true when an accident in the dead of the night results in the death of her father, the Emperor of Cyrilia — and she is sentenced for his murder.

But Ana knows what she saw that night: the scent of poison in Papa’s blood, and the face of a murderer vanishing into the dark.

Alone, hunted, and on the run, Ana makes a bargain with Ramson Quicktongue, a handsome yet dangerous underground crime lord: help her find the true murderer and clear her name in exchange for her alliance.

When Ana’s search lands her in the lair of the most powerful slave trader in the Empire, she uncovers a horrifying truth. A new monarch stands poised to lead the empire to a path of hatred and divisiveness, and Ana must stop her before Cyrilia falls to darkness. But first, she must come to terms with the monster she thinks she is and the heir she was destined to be.

In a world where the princess is the monster, oppression is blind to skin color, and good and evil exist in shades of gray… comes a dark Anastasia retelling that explores love, loss, fear, and divisiveness, and how ultimately it is our choices that define who we are.

Is this one on your TBR yet?  What do you think of the cover?