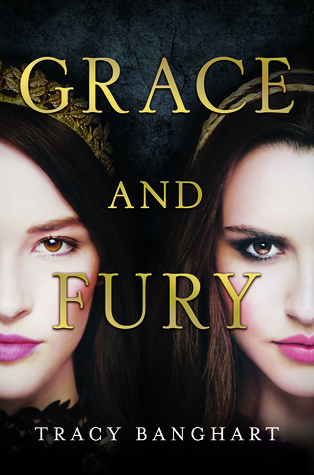 Grace and Fury by Tracy Banghart

In a world where women have no rights, sisters Serina and Nomi Tessaro face two very different fates: one in the palace, the other in prison.

Serina has been groomed her whole life to become a Grace–someone to stand by the heir to the throne as a shining, subjugated example of the perfect woman. But when her headstrong and rebellious younger sister, Nomi, catches the heir’s eye, it’s Serina who takes the fall for the dangerous secret that Nomi has been hiding.

Now trapped in a life she never wanted, Nomi has only one way to save Serina: surrender to her role as a Grace until she can use her position to release her sister. This is easier said than done. A traitor walks the halls of the palace, and deception lurks in every corner. But Serina is running out of time, imprisoned on an island where she must fight to the death to survive and one wrong move could cost her everything.

This book was really good!  There was such a great story of the love between sisters, but it was also a story about women’s oppression and them fighting back.

Serina prepared her whole life to be a Grace.  The Superior is getting older, so this year his Heir is choosing three Graces to stay with him.  Serina is chosen to be in the running and her sister, Nomi, goes with as her handmaiden.  While Serina was excited to leave Lanos  for Bellequa, Nomi was not.  She had to leave her twin brother at home.  She also knew that she was just going into another horrible situation.

Women are not allowed to read or go to school.  They could work in textile factories, become servants, or be married.  They had no rights and were taught to be meek to all men.  Nomi was defiant and always wanted more while Serina was content to learn how to dance and be pretty.  Nomi learned how to read, but had to hide it.

The night the possible Graces were meeting the Heir, Nomi slipped into the library and was caught by the Heir and his brother when they were coming out.  She wasn’t polite and made an impression on both men.

Serina wasn’t chosen to be a Grace.  Nomi was and she was horrified.  Shortly after, Nomi found a book in her room, but didn’t know who put it there.  It told of a history different than what she learned. In this history book, women used to rule until the men became afraid.  They took over and oppressed women after that.  Everyone was told a false history where men always ruled.

Serina was caught holding the book and sent to a jail on an island.  This island was filled with women who were separated into different groups.  There wasn’t enough food and they were made to fight.  The guards started it and you only won when everyone was dead or surrendered, which was as good as dead.  Serina has to learn how to be tough. She grows close to some of the women and to one guard, Val.

Everything else gets a bit crazy.  There are plots that go wrong and twists in the book that I don’t want to give away.  I did figure it out, but it was still pretty shocking when I read it.  I cannot wait for book two!  The pacing of this one was really good and kept me wanting more.

Thank you to the publisher and Netgalley for my copy for review.  I gave this book 5 stars.  Grace and Fury is out July 31st by Little Brown Books for Young Readers.  I ordered my copy today.  There is also a preorder special here.  So make sure you send your receipt in.

Have you read Grace and Fury yet?  What did you think of it?