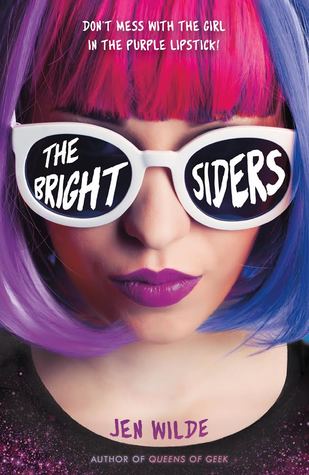 The Brightsiders by Jen Wilde

A teen rockstar has to navigate family, love, coming out, and life in the spotlight after being labeled the latest celebrity trainwreck in Jen Wilde’s quirky and utterly relatable novel.

As a rock star drummer in the hit band The Brightsiders, Emmy King’s life should be perfect. But there’s nothing the paparazzi love more than watching a celebrity crash and burn. When a night of partying lands Emmy in hospital and her girlfriend in jail, she’s branded the latest tabloid train wreck.

Luckily, Emmy has her friends and bandmates, including the super-swoonworthy Alfie, to help her pick up the pieces of her life. She knows hooking up with a band member is exactly the kind of trouble she should be avoiding, and yet Emmy and Alfie Just. Keep. Kissing.

Will the inevitable fallout turn her into a clickbait scandal (again)? Or will she find the strength to stand on her own?

Even though I have it, I haven’t read Queens of Geek, so this was my first Jen Wilde book and I loved it.

I really connected to Emmy.  Not the bisexual rock star part, but her insecurity and need to please people.  That desire to want everyone to like you.  That is very much me to the point that I do things I don’t want to do pretty often.

“I don’t know why, maybe I’m just super insecure, but I have this intense need to be liked.  If someone doesn’t like me-or even expresses a different opinion than me-it makes me judge myself.”

Emmy, Alfie, and Ryan are in a punk band.  Emmy is just getting ready to turn eighteen and gets busted for underage drinking after her girlfriend, Jessie, gets in an accident and gets a DUI.  The paparazzi goes nuts and Emmy is a wreck.  Her parents are huge drinkers and she doesn’t want to be like them.  She had a really rough childhood.  Both parents partied non stop and either ignored Emmy or made her feel terrible about herself.  Once Emmy made it big, all they wanted from her was money.  After the accident, Emmy moves back in with her parents to hide out.  She was hoping things would change, but they just seemed worse.

“I have fame, money, friends…everything that’s supposed to make me happy.  So why am I crying alone in my tub?  Why the hell am I making headlines for all the wrong reasons?  What is so fundamentally broken in me that I keep trying so hard to screw it all up?”

When she was young and things got bad, Emmy would leave and go to Alfie’s house.  Aflie is genderqueer and goes by he/him.  He’s Emmy’s best friend.

“I’ve never felt 100 percent like a girl, but I’m not a guy either.  And I don’t see why I have to fit.  Why should I try to change myself to suit someone else’s binary?  It’s like trying to fit a galaxy into a glass jar.”

Emmy starts to realize that her girlfriend, Jessie is using her and they break up.  Jessie doesn’t take it well.  She is controlling and mean.  So Emmy’s friends decide to surprise her with a trip for her 18th birthday.  During this time, things start happening with Emmy and Alfie.  They agree to keep it on the boat only, but it’s hard for either of them to keep their hands to themselves when they get back to LA.  They keep everything secret and start wondering what this will do to the band.

There is so much to like in this book.  The diversity was amazing and I loved all the music references.  Alfie also comes out to Emmy about his social anxiety which is something I have, too.  I really appreciated being able to read about that.  This was a story about friendship, discovering yourself, growing up, and falling in love.

There are some warnings for emotionally abusive relationships and teenage drinking.

Thank you to netgalley for giving me a chance to read this early.  All quotes are taken from an arc and may change before final publication.  I gave this one 4  1/2 stars (rounded up to 5).

Have you read The Brightsiders yet?  How about Queens of Geek?  What did you think of them?