Welcome to my stop on the blog tour for Hiding Lies by Julie Cross hosted by Entangled Teen.  Don’t miss the giveaway towards the bottom of the post.

Hiding Lies is the second book in the Eleanor Ames series.  Book one is Chasing Truth.

Eleanor might not trust him – she doesn’t even like him – but they can’t keep their hands off of each other. Fighting the infuriating attraction is almost as hard as ignoring the fact that Miles isn’t telling her the truth…and that there’s a good chance he could be the killer.

At Holden Prep, dirty little secrets always have a way of coming to the surface.

Eleanor Ames has never been what she seems. Average high school student on the outside, but reformed con artist trying to break free of her past on the inside. When Eleanor receives startling news about someone from her previous criminal life, plans for a new operation coinciding with her school’s upcoming field trip quickly consume her.

But operations rarely go according to plan. And this is one her irresistible teen FBI agent boyfriend, Miles, would never approve of.

Now, more than just Ellie’s reputation is at stake. If she fails, it could be her life. 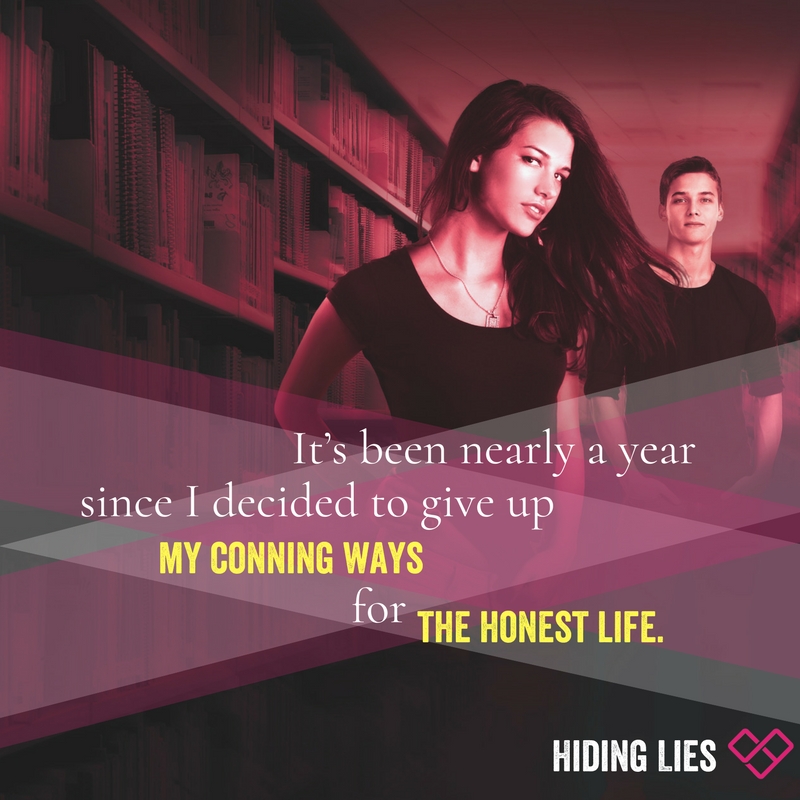 Link to my review of Hiding Lies.

My feet have been dangling. I start to lift them up, attempting to conceal myself. But I’m not fast enough. Warm fingers wrap around my ankle.

“Got you,” the guy says. “How long have you been up there spying on me?”

“Spying? On you?” I shake my head. “Don’t know what you’re talking about. I’m waiting for someone. He’ll be here any second.”

The hot guy takes the binoculars and looks them over, analyzing the zoom-in and recording switches hidden on the underside. “Fancy. Not exactly for recreational use.”

That’s because they’re Aidan’s. My sister’s boyfriend. Up until two weeks ago, when he was forced to resign, Aidan was a Secret Service agent. He used all kinds of spy gear in his former job—like these high-tech night-vision binoculars.

I hop down from the tree, assessing the intruder, searching for body language that says friend or enemy, even though I already know the answer. No harm in having a little extra practice. Role-play is definitely a skill of mine, but it’s also a muscle that must be worked regularly. “Just so you know, I am trained in self-defense. Wouldn’t try anything if I were you.”

“Yeah?” He lifts an eyebrow. “That’s good because this place is sketchy as hell.”

We both glance around the deserted warehouse building beside us, the vandalized lumberyard nearby, and the questionable items strewn across the walkway leading to the giant warehouse door—condom wrappers, broken beer bottles, cigarette butts.

“You’re right, it’s sketchy,” I say. “I better take off before something bad happens.”

“Wait…” Hot Guy reaches for me, his fingers curling around my waist. He tugs me until my back rests against the tree and we’re hidden from anyone on the street. “Tell me about this other guy you’re waiting on.”

I stare up at him, taking in the cocky smirk, perfectly messy dark hair, and blue eyes that hold dozens of secrets. “What other guy?”

He grins, showing off two perfect dimples to go with the rest of his perfects. “Good answer.”

Then, before I can refocus on the role I’ve been playing, he leans down and kisses me. It’s only been a week but feels like a month. Maybe longer. His cheeks are cold, but his lips are warm and tender. I bring him closer and closer until his slinged arm is lodged between us.

“Miles,” I mumble against his lips.

“Miles,” I repeat, too caught up in this kiss to celebrate the slip he just made. “That’s his name. The guy I’m waiting on.”

“Miles. Sounds like an asshole. Forget him.” He pulls away just enough to see my face. His good hand rests against my cheek. He looks like he’s about to dive into kissing me again but hesitates. “It’s really cold out here.”

“And sketchy,” I add. “Why would you pick a place like this? You can’t coast forever on the whole mysterious-hot-guy persona. So if that’s your plan, I’d rather meet at the Y or Planet Fitness like a normal person.”

He rolls his eyes. “Yes, that’s my goal in life. Devote all my time to training to be a spy so I can impress girls.”

Julie Cross is a NYT and USA Today bestselling author of New Adult and Young Adult fiction, including the Tempest series, a young adult science fiction trilogy which includes Tempest, Vortex, Timestorm (St. Martin’s Press). She’s also the author of Letters to Nowhere series, Whatever Life Throws at You, Third Degree, Halfway Perfect, Chasing Truth, Off the Ice and many more to come! Julie Cross was a longtime resident of central Illinois but has recently moved her entire family across the country to continue her academic studies at Stanford University. 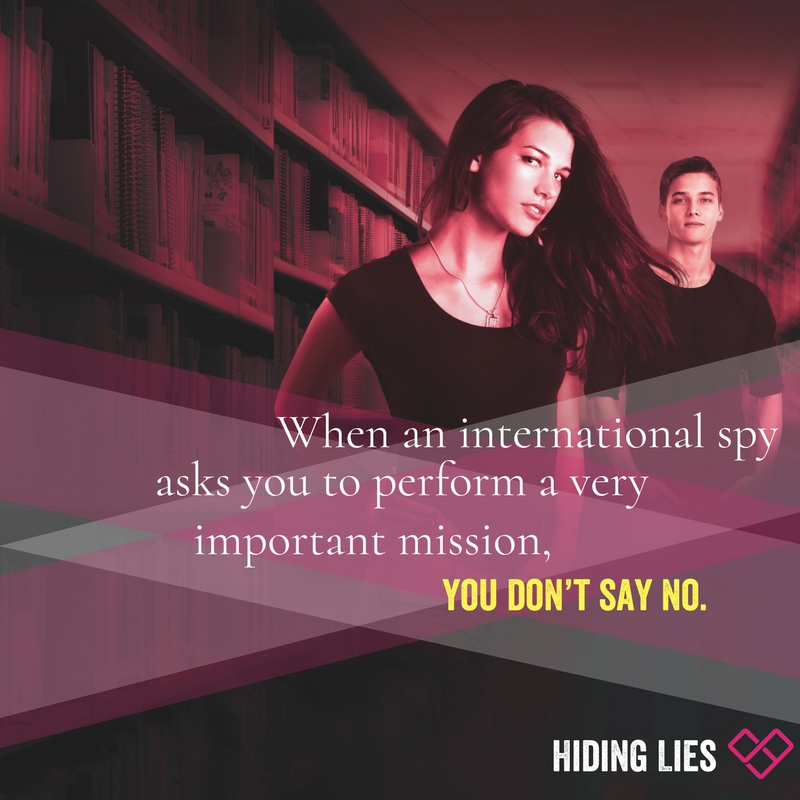 Enter to win a paperback copy of Chasing Truth. 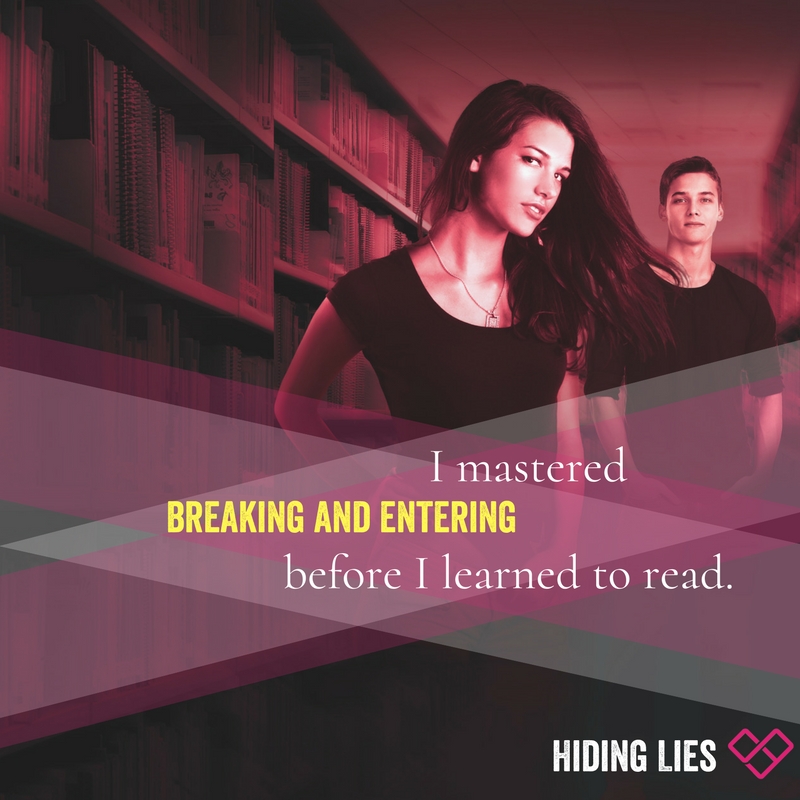 Thank you for stopping by today!  Have you read Chasing Truth and Hiding Lies yet?

2 thoughts on “Blog Tour for Hiding Lies by Julie Cross”